Barry's is back to hold its highest ever fitness class in Sky Garden, followed by an after party - all for charity 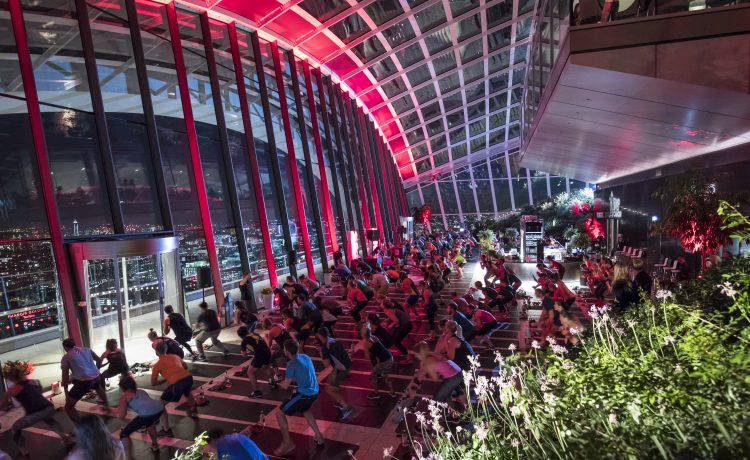 We all love a fitness class with a twist and that’s exactly what Barry’s x Sky Garden is planning to offer, this coming September.

What is the Barry’s x Sky Garden class?

Barry’s x Sky Garden class is a one-off HIIT class event, followed by an after party, with the aim of raising money for the Alzheimer’s Society. Taking place on Monday 17th September, there are less than 200 spaces and tickets are being released in batches.

For anyone who has never heard of Barry’s before, they’re a company providing intense bootcamp sessions that make a difference. Based around the world, they a wide variety of celebrity clients and the very best trainers.

All Barry’s classes are held in dim lit, red studios to motivating playlists of music, and this will be recreated on the night. The feel of the room is said to add an element of excitement to the workout, allowing you to dig deeper and lose yourselves.

155m above the city of London, the class and after party hosted in the Sky Garden will offer the most amazing views of London. And who doesn’t love a workout with a twist?!

A number of expert trainers will be taking part and leading the HIIT workout. Jemma McKenzie Brown has already been named as the trainer who will lead the cool-down sequence.

The after party will have a DJ providing entertainment and there will be a variety of post-workout treats available (including Ahi Poke and Get A Drip).

Dementia is a cause which is particularly close to the hearts of the Barry’s team and we’re delighted to have the opportunity to raise funds for the Alzheimer’s Society, particularly as the charity moves into its “Dementia Revolution” campaign

What is the Dementia Revolution?

Already announced as ‘Charity of the Year’ for the 2019 Virgin Money London Mararthon, Alzheimer’s Research UK and Alzheimer’s Society have joined forces to launch the Dementia Revolution. A year-long campaign with the aim of raising £3.5m that will go towards the fight against dementia.

There is close to one million people in the UK alone living with dementia right now. Over 50 million in the world.

You don’t have to personally run the marathon to get involved; you can donate, raise money, volunteer and even help to spread the message.

In 1998, Barry Jay wanted to set up a one-stop cardio and strength training workout. This became a reality when he teamed up with John and Rachel Mumford. The first Barry’s Bootcamp launched in West Hollywood.

Since then, the company have signed star trainer Joey Gonzalez, expanded across America between 2009 and 2011 and then globally from 2011. The global expansion includes the UK, Canada, Norway, Sweden, the, UAE, Italy and Australia.

Members have a choice between keeping it casual (booking one to 50 classes in advance) or booking a monthly membership.

Where can I get tickets for the Barry’s x Sky Garden class?

Whilst the tickets are a tad on the expensive side – £80 per ticket – 100% of the proceeds do go to the Alzheimer’s Society. And that £80 doesn’t just get you into the HIIT class, it gets you access to the after party too.

When: The class starts at 7:30pm, just as the sun is setting.

Check out our Events Calendar to find other events that might be of interest.

10 celebrities you didn’t know were runners

How to prepare for long distance running – top tips from Sweat It PT, Jamal Kurdi

Are you a running beginner? How to start running from scratch