Ben Smith: the 401 Challenge and the upcoming USA 2020 Challenge 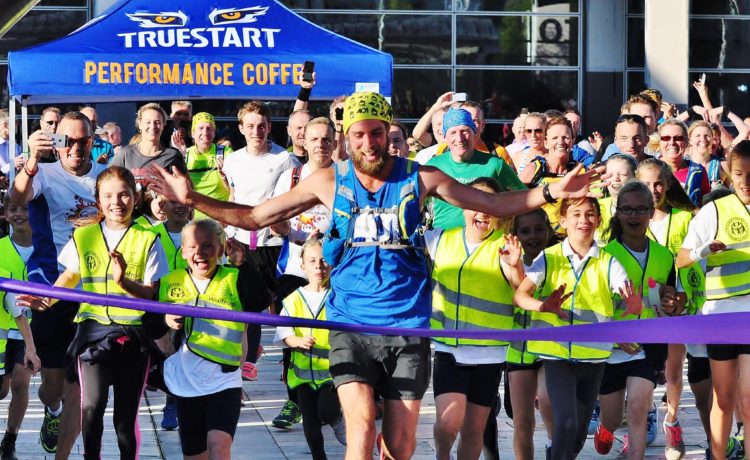 Walking around The National Running Show at the weekend I came across the stand for The 401 Challenge and a giant map of the USA with pins all over it caught my attention. I’m ashamed to admit I didn’t know who Ben Smith was or what The 401 Challenge was, but I’ve been educated and it’s a story that has to be told!

Who is Ben Smith?

He grew up in a very close military family and had a great start to life. His family life meant that up until the age of 10 he got to travel the world. However, at the age of 10, Ben was sent to a boarding school in the UK as the base his parents lived on didn’t have any schooling available.

Boarding school wasn’t a great experience for Ben. He quickly began to be bullied. This sadly went on for eight years.

Life became a struggle for Ben, after enduring years and years worth of bullying. But he threw himself into what was deemed by society as a ‘successful life path’ that saw him working 60 to 70 hours a week for a FTSE 100 company. Here he rose through the ranks, but he also drank heavily, ate too much, smoked a lot and neglected exercise altogether. Ben eventually suffered an incomplete stroke (an ITA) and used this as a catalyst to evaluate his life.

Given the chance to join a running club, Ben took the opportunity with both hands. He soon began to lose weight and he slowly began to feel better about himself.

What was the 401 Challenge?

He went from struggling to run for the bus, to running his first marathon, running 30 marathons around the world and then coming up with The 401 Challenge.

His objectives were clear:

In order to complete The 401 Challenge, Ben sold everything he owned and relied on the kindness of his partner, family, friends and complete strangers.

It wasn’t an easy challenge; there were many obstacles for Ben along the way, from nutrition, keeping his mind strong and on track as well as recovering from injuries that he picked up along the way.

He’s since gone on to write a book about the challenge. Many of you grabbed a copy at The National Running Show from The Running Bookshop, but if not then you can get your hands on one via Amazon: 401: The Man who Ran 401 Marathons in 401 Days and Changed his Life Forever.

This takes me back to the map of the United States on the wall on the stand at the exhibition. There was one pin in each of the 50 states, with string linking all 50 of them.

Ben’s new challenge is going to be his most intensive yet – The USA 2020 Challenge. He’s going to run a marathon in all 50 states of America. If that wasn’t hard enough, he’s then going to cycle from state to state. I feel for his legs already and he hasn’t even begun yet!

Starting out in Augusta, Maine, March 2020, the aim is to finish up in Honolulu, Hawaii, in June 2020. The team are fully expecting to encounter all different types of weather, terrain and unknown obstacles.

And what’s the aim this time? To raise a whopping £1 million to support The 401 Foundation and The Youth Support Trust. Both charities work hard to show the positive effects that physical activity can have on someone’s confidence, self-esteem and overall mental health.

How can we get involved with the USA 2020 Challenge?

Ben and his team are going to need a lot of money to get them through the USA 2020 Challenge. All in all, they’re going to need to raise £200,000 in sponsorship. That’s before heading out to the states and before they begin to raise money for charity.

Corporate sponsorship for the USA 2020 Challenge

The team have listed five key ways in which businesses can partner with Ben and sponsor the team on the upcoming USA 2020 Challenge:

Personal sponsorship for the USA 2020 Challenge

For those wanting to get involved themselves, there are two virtual challenges coming up:

First and foremost, you’ll need to get yourself a Strava acccount to take part in the Run Challenge. The aim is to run or walk as many miles as you possibly can between 13th March 2019 and 13th March 2020. It’ll cost you £24.99 and at the end of the challenge your miles will be added up and you’ll be rewarded with a milestone t-shirt. What’s more, you’ll also have your full name added to each of the four bikes set to be used in The USA 2020 Challenge.

Similar to the Run Challenge, for the Cycle Challenge you’ll need to set yourself a goal of cycling as many miles as possible between 13th March 2019 and 13th March 2020. It costs £29.99 to take part in the challenge, you again need to have a Strava account, and you’ll win a 401 Challenge cycling jersey and your name added to each bike to be used in the states.

Don’t forget to check out our Events Calendar for more information on other events in and around the UK.

Foam rollers: why do I need one and what do they do?