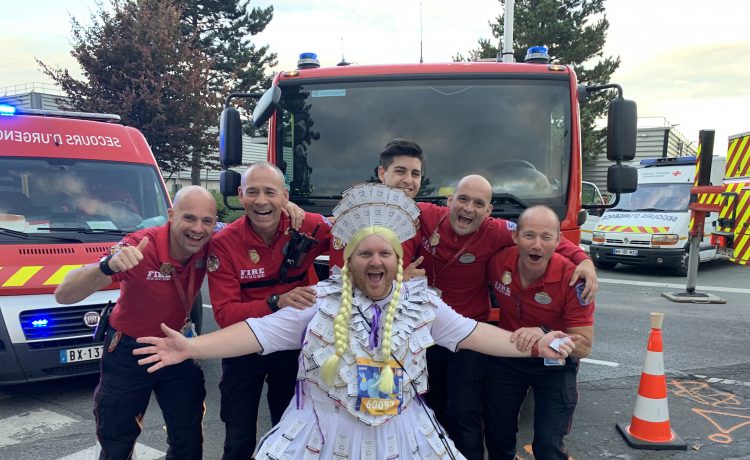 33 year old Dom Hodgson is known for being a fancy dress fundraiser, having successfully managed to raise over £40,000 for Martin House Hospice Care for Children and Young People. He has so far taken part in almost 100 races over the last five years, all around the world. What makes this an even more amazing feat is that Dom hates running.

He plans to retire from running after completing the Disney Dopey Challenge in Florida in 2021. This challenge will have him run a 5K, a 10K, a half marathon and then a full marathon over four days. A total of 48.6 miles that Dom, once again, plans to complete in fancy dress.

Unfortunately the current pandemic has put a dampener on his fancy dress fundraising and training plans. Not one to back down, Dom has launched his own #twopointsixchallenge which will see him running 26 socially-distanced half marathons. You guessed it, each in a different costume, on the treadmill he has at home.

Dom’s half marathons will be streamed live online every Friday at www.rundom.run. He completed his first last week and we’re planning to follow him all the way through. Don’t worry, we’ll be sure to keep you updated on how he gets on.

Dom was quoted as saying:

“I hate running, but I realised that when raising money for charity, the more uncomfortable I am, the more money I raise, so every year I’ve put on stupid costumes and raised money for Martin House.

“The Dopey is a fitting finale to five years of fundraising with running. As a Disney fan it’s the ultimate challenge, the hardest one that they do, and something I’ve said for years ‘I’ll never do that’ but turns out I can’t resist a challenge.”

“Dom really knows how to put the ‘fun’ in fundraising, and we always look forward to seeing what costume he comes up with next. We hope