Jogger's race test monkey, Rob Keeble, talks about his experience of Trimax's cross country race like no other 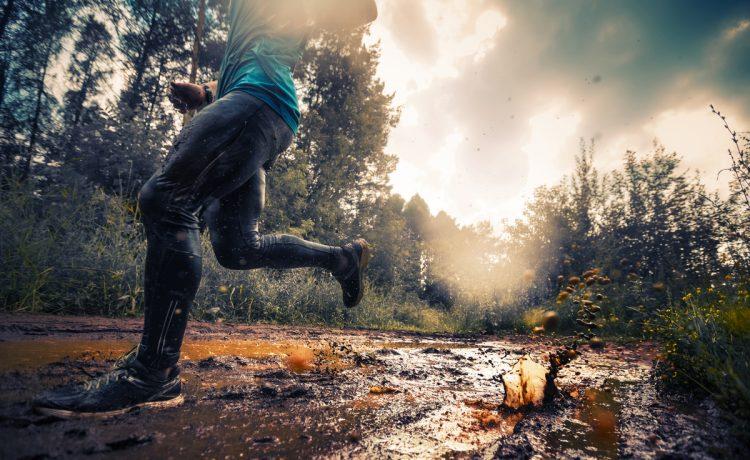 Running over muddy ground on a cross-country run.

For most people, a Sunday morning would involve a lie-in, a late breakfast, and maybe a leisurely stroll to the park with the kids or the dog. Would many consider a  strenuous cross-country run to see off the week? Unlikely, but then that’s where runners can be a bit odd.

For us lot, Sunday morning is the King of the week. The perfect time to get out and run.  Whether it’s a social park run, the weeks “long run” as we train for an event or indeed an event itself. Sunday is the running day of the week and this week was no different.

Trimax events were hosting “May Hill Massacre”, a running event billed as a tough 9-mile cross-country run. It has two ascents scaling 474 meters over May Hill in Gloucestershire. All that, and with a serious amount of mud thrown in too, makes it a challenge not to be taken lightly.

I’d run this course a year earlier in 2017 and believe me, it is mentally and physically challenging like nothing else you’ll ever do – including mud runs.  I’d spent a lot of the autumn and winter trail running in the lead up to the race but nothing, and I mean nothing, prepared me for the leg-burning, vomit-inducing, heart thrashing endurance challenge that the May Hill Massacre is.

That year I’d managed a respectable 1 hour 30 mins but I really wanted to break that 90 minute time and knew I could do it faster.  Yes, this was very much an endurance challenge for the body and the mind and one I was very determined to take on and conquer once and for all …

Parking was free for the event however space was very limited so many people car-shared.  I live locally so I ran there and back to warm up and cool down. I definitely recommend doing so because this gave my muscles chance to properly warm up ahead of the challenge.

Registration was on arrival and was well organised with toilet facilities on hand for those who had over-hydrated in the run-up.

The start of the race quickly set the tone of what was to follow with the first, long and steady climb starting just several meters from the start line itself.  I knew what to expect though so made a point of not going off as quickly as I did the previous year and just let my body adjust to the climb. I focused on getting my breathing right. Deeply inhaling as much oxygen as I could hoping it was enough for my legs to ease into the steady ascent.  With the path being so narrow it made it difficult to get any sort of starting pace.

The stronger faster runners were struggling to get past those who were already falling at the first hurdle, presumably not appreciating exactly what they had signed up too. I felt relaxed, I knew space would open up and I could draw upon my hill training experience to up the pace at that point.  About a mile into the run I did just that and whilst the hill ascent kept going, and going, and going, space opened up on country lanes and trails leading us onto the common as we weaved up over the summit of May Hill.

It was at this point I knew I could crank through the gears.  As we ran across the summit I felt the cold air burrow into my lungs, giving my body the vital oxygen supply and sweet-relief it needed. Energised I found my competition pace which was most welcome and familiar to me after that lung-busting climb from the very start.  Better still were the views right across Gloucestershire, as well as the neighbouring counties of Herefordshire and Worcestershire which were there to greet me along the way.

Cheering crowds blared their support shouting on all those hardy runners who’d made it to the summit.  However, the enjoyment of this spectacle was short lived as we made our descent down the other side of the hill into Newent woods. And there was mud: lots of mud.

The downward trail took a lot of concentration as I tried to increase my speed whilst ensuring I kept a clean footing pattern on the ground. Avoiding the many loose rocks and potholes which could cause me a serious injury if my foot went down in the wrong place.  My eyes watery from the strain of darting left to right looking for that next safe step.

As I acclimatised to the milder air in the woods, I was met with undulating climb after undulating climb through mud quite literally a foot deep. Brambles whipped and snapped my legs as I  tried to negotiate a route at speed,  whilst ensuring I stayed on my feet without keeling over with exhaustion both physically and mentally.

Never has my pace at an event increased and decreased so rapidly and so often. Trying to maintain my concentration as I mindfully consider where to place each step to mathematical accuracy through equal fear of twisting an ankle or ending up head first in the mud.  At one point, I put my left foot down and we had casualty number one of the day: my trainer as it was wiped clean off!

Frustratingly, with my slippery mud-covered hands, I fumbled at my shoe desperately trying to hook it back over my heel.  Of course, I had tied the laces tightly to begin with so this was no easy feat made harder by the fact there was literally no dry ground to stand on. I became increasingly aware of my time slipping away and the runners, who I’d earlier left behind, caught up and moved ahead as I fought my shoe.  In the end I jumped into a ditch full of bracken as the cuts were worth the price of meaning I could get some traction under foot to force my shoe back on.

After a couple of minutes I was back on my feet with the pressure on to make up lost time and to get back in front of those who had passed me. The twists and turns of the trails through the woodlands made sure that after a few miles I literally had no idea which way I was facing or when the next sharp hill climb was coming but I just had to keep pushing hard.  My legs were burning and my back aching but I kept focusing on catching and passing those runners who’d got past me during “shoe-gate”.

Just when you thought that you’d made the last, teeth clenching, stomach burning, mind-numbing ascent, there had to be one more around the corner.  Eventually, having once again reached the top of May Hill, I had regained my position and as we began the final mile or so down the trails. The Deja Vu kicked in as I retraced the steps from earlier where we had been climbing up what felt like hours before I kicked into full road race pace.  The more we descended the more relieved I felt.

Every downward step was calculated as my extremely tired legs and fatigued mind had one more push to the bottom. For me the race wasn’t over yet. I wanted to beat last years’ time and join the sub-90 club. I kept pushing as much as possible on tired jelly legs down rocky gravel paths before finally coming in over the finish line in 31st place with an official chip time of 01:20:36.  Tired, muddy and very, very cold but I was also ecstatic, having beaten my 2017 time by 11 minutes.  Job done.

Awaiting us was the finishers’ medal which I really liked. It’s striking yellow and metallic silver skull face was a very different medal to the type you’d usually get at running events and one which certainly captured the spirit of the event too!  We also received a can of low-alcohol Electrolyte beer from the event sponsor, Erdinger which is marketed as being a recovery sports drink but with the added treat of being a beer.

This is a very different race to your average 10k or half-marathon and is one of the toughest runs you could take part in so if you fancy a real challenge I’d highly recommend it.

Maybe I’ll see you on May Hill in 2019? Or if not there perhaps somewhere else? Check out our events page to see if any take your fancy.

Looking to freshen up your runs? 3 new running disciplines for you!

Are you more or less active since lockdown landed?