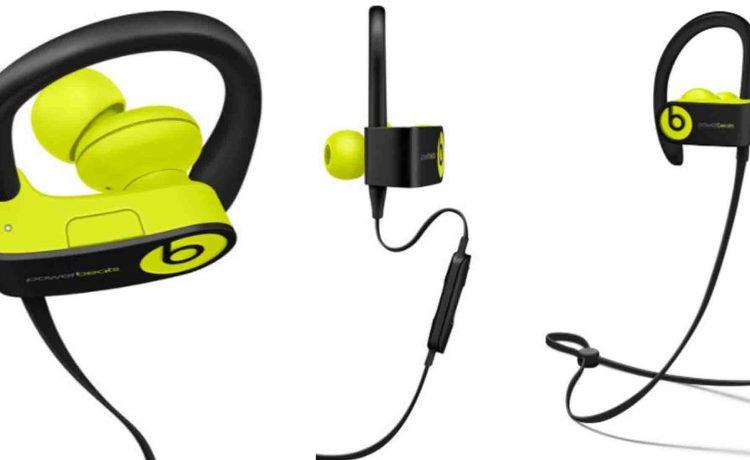 Up until I bought these Powerbeats3 Wireless Headphones from Beats by Dre I was always a Bose fan. Bose range of sports headphone have always done me well, up until I did a Three Peaks Challenge and they gave up at the top of Ben Nevis.

After Bose refused to give me a replacement (they were only two years old) I decided to switch brands and got hooked on the Beats By Dre marketing machine. After researching around I went for the Powerbeats3 Wireless Bluetooth Headphones, in shocking yellow (I know)! I bought mine from Currys for £149.95.

Out of the box

From the moment you open the box you can tell these are a quality product. They have a really cool, flexible, neoprene case in which you can keep them safe and they look super stylish. They are so stylish in fact that they have got more people talking to me (asking questions about them) in he gym than any other piece of gym clothing or accessory that I have ever owned.

Mine came with a good chunk of charge already in them but I also made sure I charged them fully straight out of the box using the handy USB cable that came with them.

Connecting to your phone

It is no shock to hear that, like many others, I have an iPhone. The Powerbeats3 sports headphones connect seamlessly via Bluetooth technology. It took me less than 30 seconds for them to connect for the first time from the time that the headphones were taken out of the box and switched on.

It is also worth noting that they have never dropped out or lost connection. Something that I seem to have happen with every other fitness device that is Bluetooth connected to my iPhone.

This is where the Powerbeats3 sports headphones really stand out. The music quality is excellent and far outperforms even the Bose range of sports headphones. They are loud enough to drown out even the most persistently rubbish music that the gym is playing through their tannoy system and I have never found myself wanting them to go louder than the max output.

There is real depth to the music, especially if you wear them with a hat when out on a run or bike ride (as mentioned elsewhere).

With Beats by Dre now being owned by Apple I was fearful of the battery life but I have had mine for over a year now and have not had one issue. I can probably go a good two weeks, maybe more, without hearing the warning sound that they need charging.

Staying in ear during sport

No matter what anyone says, the biggest frustration when it comes to sports in-ear headphones is the fact they fall out fairly frequently, especially when running but this is NOT the case with the Powerbeats3 Headphones. Regular readers will know just how much I am trying to run in this current training cycle and I can safely say that these have never fallen out. Yes they come a bit loose but you never lose them completely.

The Powerbeats3 by Beats by Dre far outperforms the Bose headphones that I previously had, they were always falling out and this was despite me faffing with the various replacement ear buds that came with them.

I tend to run wearing a beanie hat and I find this pushes the Powerbeats3 further into the ear and keeps them in place. Obviously, I don’t wear this hat in the gym (I’m not that person) but the headphones stay in when I am on the treadmill, rowing machine and stepper.

As I mentioned earlier, these headphones have caused more people to talk to me in the gym than ever before. Beats by Dre has this kind of mystery about them and everyone thinks they are far more expensive than they really were. They certainly get people chatting.

Yes the Powerbeats 3 sports headphones are more expensive than the majority of other sports headphones brands on the market but the look and performance is second to none. The music quality is brilliant and they stay in your ears no matter what you are doing in the gym or on the road.

the authorAndy Barr
Editorial Lead
Andy was late arriving into the world of fitness, running and training. He did not really take up regular gym going until he was in his late 30's. He lost over 7 stone in weight since starting and completed an olympic length triathlon in June 2018. He enjoys playing football, boxing and outdoor running.
All posts byAndy Barr
Leave a reply

I overpronate – what running shoes should I wear?

Give it a tri! The transition from Runner to Triathlete