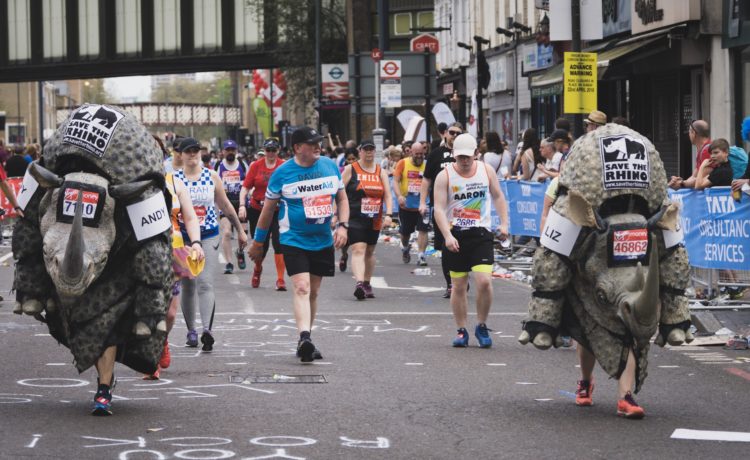 The London Marathon Rhinos are a fixture. Picture by Paul Hudson, Flickr


Running the London Marathon can be one of the most rewarding experiences . It is one of the most iconic 26.2 races in the world. It’s flat and fast, has great support, and genuinely takes you past nearly every major site in the capital.

I’ve done it twice and can pass on the following tips for all those about to toe the line with Farah, Keitan, Kipchoge and Kosgei on Sunday.

Optimism is great but reality will get you in the end

London is largely downhill for the first five kilometres, and it is exciting to be in the middle of such a huge race. You are fresh after a solid taper and it is very probable you will look at your watch and think ‘Wow! How am I running so fast?’

The truth is there will be payback for that effort, so curb your enthusiasm and stick to your plan. It is natural to be five to 10 seconds quicker per kilometre on a downhill section but if you’re hitting 30 seconds then you need to hold back.

The crowds are special at the London Marathon

I have done a lot of races of distances from 5km to marathon. Nothing – no matter how much people told me – prepared me for the roar of noise and the overwhelming positivity from the London Marathon crowd.

Cheers, posters and high fives all helped get me round. I have joint favourites:

The crowds thin out a bit in Canary Wharf but it is quite nice to have a little bit more peace and be able to prepare yourself for the final five mile push.

The number of numpties who choose to simply drop a water bottle at their feet, leaving it to trip a fellow runner, is staggering. I was one of those fellow runners and it ended my hopes of a moderately fast run in 2016.

Even more staggering are those who thought the best alternative was to launch water bottles over the heads of other runners. Some of the bottles are 90 per cent full and, while it meant they avoided tripping fellow marathoners, the bottles become vicious missiles to spectators.

You WILL be overtaken by someone in fancy dress

Nothing will prepare you for being overtaken by a runner in a large fancy dress costume, it is a peculiar kind of damage to your self-image.

When a 7ft lobster overtook me in my first marathon it deflated me more than the pain in my feet and the burn in my claves.

Just be reassured in the knowledge that Yuki Kawauchi, the man who won the 2018 Boston Marathon, regularly completes races in a fancy dress. You never know who’s running the London Marathon under the suit!

Well technically it is, but in terms of effort it is not even close so don’t get your hopes up.

Most runners who have put in a good amount of training will hit London Bridge near the halfway point in good shape. Inspire of that, a lot of them will find the wheels fall off in the next eight miles.

Aim for 20 miles as your personal half way point. To me, that is a more realistic point in terms of effort; trust me, the last six miles will be every bit as hard as the first 20.

There’s no point trying to fool yourself – the disappointment is way harder to take than realism!

In most races, you cross the line and get an instant breather; not at London, where you will be funnelled straight through to the lorries where your bags are stored.

There is no real space to sit and take the weight off until you have collected your bag and walked the few hundred metres to St James’s Park. That modest distance will feel like another mile before you finally get to take the weight off your battered feet.

You will instantly want to do another

I swore off marathons forever in March, inspiring this breakup letter. Within seconds of running the London Marathon in 2016 I had decided to claim my Good For Age spot in 2017 and do everything I could to break that 3hr mark.

The truth about fitness trackers: are you running an extra eight miles?

Warm up and cool down tips – IFBB and WBFF Figure Pro athlete, Eleni Plakitsi, gives us her top tips