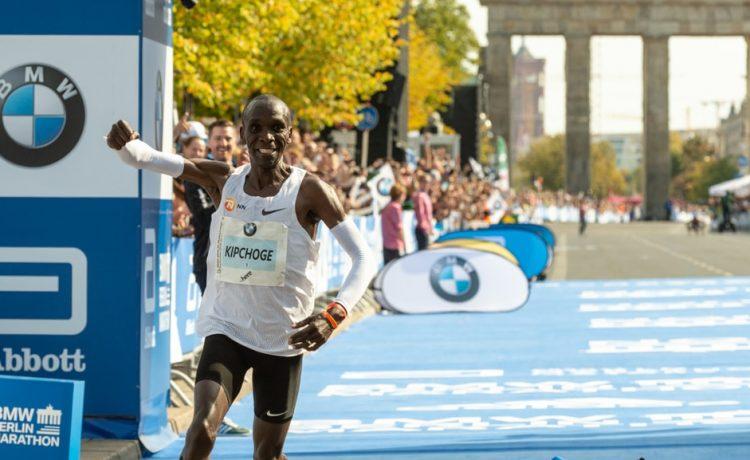 Who is Eliud Kipchoge?

Eliud Kipchoge is all over the news right now for absolutely demolishing the marathon world record.

The 33-year-old Kenyan completed the Berlin marathon in an amazing two hours, one minute and 39 seconds. He beat Dennis Kimetto’s world record, set in 2014, by one minute and 18 seconds. Whilst that doesn’t sound like very much, when you’ve been running straight for over two hours, that’s a big jump.

What’s more, Eliud found himself having to run the last 17km (10.5 miles) of the marathon by himself as his pacemakers dropped out early. Pacemakers are there to set the pace, guide the runners along the route and encourage those at the front to set records. Not long after the 15km, two pace makers were unable to continue and the third had dropped out by 25km.

What is the Berlin Marathon?

The BMW Berlin Marathon is classed as one of six World Marathon Majors. It attracted 61,390 participants from 133 nations this year. It wasn’t just runners who entered the marathon though; there were also inline skaters, kids skating, wheelchairs and handbikers, among others. Of those, 40,775 finished the race.

A second world record was set at the 2018 Berlin Marathon ; Manuela Schaer from Switzerland won the women’s wheelchair race. She held the previous world record, set in 2013, and beat her own record this year by over one minute, finishing in 1:36:53 – her third consecutive victory in Berlin.

Athletics is not so much about the legs, it’s about the heart and mind.

What are the World Marathon Majors?

Alongside the Berlin Marathon, the other World Marathon Majors are:

What else has Eliud Kipchoge accomplished over the years?

Eliud first burst onto the scenes in 2003, taking gold at the world championships over 5,000m at just 18 years old.  He then went on to win a silver medal at the 2004 Olympics and a bronze at the 2008 Olympics.

In 2012, he discovered that marathon running was where he really excelled. He’s since gone on to win 10 out of 11 races over 26.2 miles that he’s taken part in, including winning the London marathon three times and taking home a gold medal at the 2016 Olympics (Rio de Janeiro).

I’ll be the first to say it: if you train well, concentrate well, stay healthy, then you can run a world record and win medals without anything bad.

Just last year, Eliud wanted to smash the two-hour barrier for marathons and he took part in Nike’s Breaking2 project. Unfortunately, his final time of 2:00:25 wasn’t considered an official mark. Firstly, because it was 26 seconds over the target. Secondly because he had a team of 30 elite pacers that helped him along the way. But it’s believe that this is what gave him the mindset that he could and he would smash the current marathon world record.

Where did Eliud Kipchoge come from?

He comes from a simple, humble background in Kenya. Growing up on a farm, he’s not one to shy away from hard work and long hours. He could often be found cycling to Kapsabet as a kid in order to sell his family’s milk at the town market.

Living in a camp with the rest of his team whilst training (instead of in his home with his wife and children), Eliud likes to get up before the sun each day to go for a run. By the time he gets back to camp, he showers and eats before completing his daily chores. This might involve a little gardening, chopping vegetables for the communal dinner or even cleaning the toilets. Whilst he’s a self-made millionaire, he likes to stick to his root. He goes for a second run of the day at 4pm and then the team are all in bed by 9pm at the latest.

Even to this day, Kipchoge’s diet is a simple one. He drinks milk from cows that roam the fields close to his training camp and his meals are largely built around rice, ugali (a Kenyan staple) and sometimes beef.

You can follow Eliud Kipchoge on Facebook, Twitter and Instagram to stay up-to-date with all of his latest runs, achievements and work. We’re sure there is a lot more to come from Eliud and will be following him closely ourselves.

the authorSam Summers
Editor
Sam is a regular gym goer who loves a strong spin or step class. Her main fitness goal is to look super buff for her wedding and also to start lifting heavier weights.
All posts bySam Summers
show 1 comment

How to find a running partner