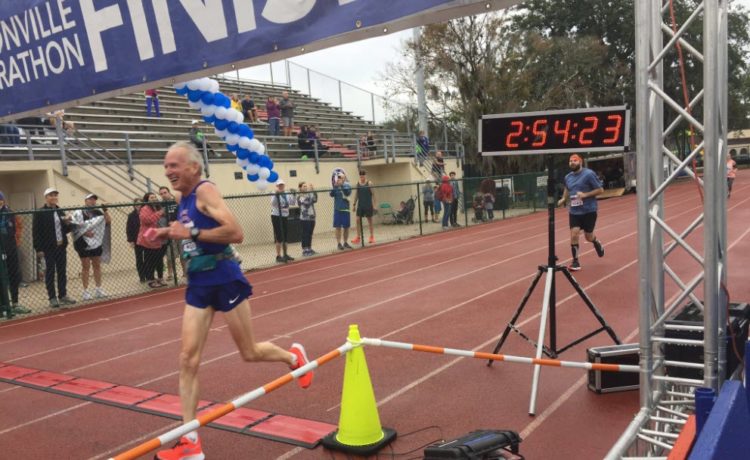 Gene Dykes, the fastest marathon runner for his age group

Who is Gene Dykes?

Gene Dykes is the world’s fastest 70-year-old living marathon runner. He set the world record for his age group at the marathon on Saturday 15 December 2018 in Jacksonville Florida, running his 101st marathon!. Dykes ran 2:54:23, breaking the previous record by 25 seconds, which was previously set by the Canadian runner Ed Whitlock, who is 73. In completing the race and smashing the world record, he averaged a 6:39 pace during the 26.2 miles – amazing stuff!

From Bala Cynwyd, Pennsylvania, Dykes use to run track back in school at Lehigh University, but took a 30-year break from dedicated running after college. He also had suffered a severe hamstring injury during this time, so stopped completely to allow it time to heal.

During the years Dykes wasn’t running, he obtained a PHD from Cornell University, had a career as a computer programmer, and also had a passion for golf and bowling.

In 2004, he started with a training group and before long was racing most weekends. By 2011 he was well on his way to participating in the renowned Comrades 56 mile Ultra in South Africa. Dykes did well in races, but couldn’t seem to better his times.

In 2013, after running his first marathon in Toronto, Dykes wasn’t satisfied with his results so he hired a coach – John Goldthorp. Goldthorp is a specialised fitness coach who helps runners become faster and less prone to injury. He was recently named ‘Philly’s Best Running Coach’ by Philadelphia Magazine. Goldthorp completely transformed Dykes and his training program.

A new marathon world record was set today…by my 70 year old dad, Gene Dykes ? It’s his 3rd time this year running a sub-3 hour marathon & 3rd times a charm because his race today of 2:54:23 was fast enough to break the last record set in 2003 by Ed Whitlock! pic.twitter.com/I2q0fg2WRs

Before Dykes started training with Goldthorp, he ran long miles three-to-four days per week. When Goldthorp took over his training regime, his training consisted of harder workouts with fewer miles and less rest days. It’s been said that Dykes had a good relationship with Goldthorp and was determined to follow his advice. Under Goldthorps guidance, Dykes won 10 United State Track and Field titles, he also went onto become an ultra-marathoner competing in events that were more than 200 miles.

Dykes has said in interviews that he is slightly dehydrated when he starts a race, and consumes few calories in order to keep his weight down. Dykes is 5ft 10 and weighs in at 140 pounds.

I’ve often said that my ability to recover is my super power.

What’s on the horizon for Gene Dykes?

His current plans are to continue running and participating in marathons and ultra-marathons. His goal is to beat his own record; the one he’s only just gone on to set. He will be training for Boston next April, and will be doing marathon specific training for the new year in order to better his own time and record.

He’s new to Twitter and can be found tweeting from @TheUltraGeezer.

Joining a new gym? Here are our do’s and don’ts!