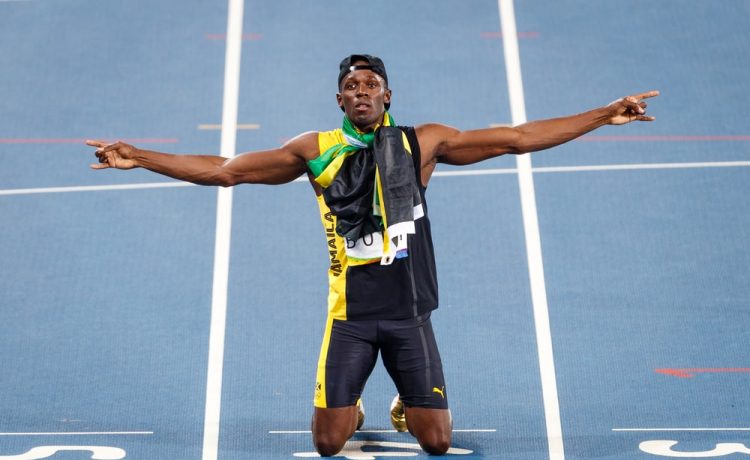 Who is Usain Bolt?

Usain Bolt is world-renowned for his running and for being one of the fastest men in the world, if not THE fastest man in the world at one point.

He’s won 9 gold medals at Olympics over the years, spanning 2008, 2012 and 2016, completing what’s known as the ‘triple-triple’. He managed this by winning gold in the 100 metres, 200 metres and 4×100 metres at three Olympics. There are only two others in the world who have achieved the ‘triple-triple’ status; Paavo Nurmi of Finland (a middle-distance and long-distance runner) and Carl Lewis of the United States (track and field athlete).

In his 9 Olympic gold medals, Usain Bolt ran for a total of less than 2 minutes. pic.twitter.com/5m5m00fPQW

Unfortunately Bolt was stripped of one of these gold medals after fellow teammate, Nesta Carter, was found guilty of doping.

But this is just the tip of the iceberg for Bolt’s accolades. The 11-time world champion holds world records for 100 metres (9.58 seconds) and 200 metres (19.19 seconds) and has won numerous other awards, including the IAAF World Athlete of the year (not once, but twice), Track & Field Athletes of the Year as well as Laureus Sportsman of the Year.

It always feels good to go out on top, you know what I mean?

It was a sad day for sports fans the world alike when Bolt announced his retirement in August 2017.

Born in 1986, Bolt was always sporty, partaking in both cricket and sprinting from a young age. It wasn’t long until coaches at his school noticed how fast he was and Bolt began to focus solely on his running and sprinting with the help of former Olympic sprint athlete, Pablo McNeil, before being mentored by Glen Mills.

Bolt was his first medal in 2001, at the age of 14 years old, after winning silver in the 200 metre right in the high school championships. By 15, Bolt was already making a name for himself at the 2002 World Junior Championships in Kingston, Jamaica. Here he won his first gold medal and became the youngest world-junior gold medallist EVER. The very first title that he would go on to smash and make his own.

Following on from this, Bolt received the International Association of Athletics Foundation’s Rising Star Award and quickly picked up the nickname ‘Lightning Bolt’.

How did Usain Bolt end up at the Olympics?

Usain Bolt found himself picked for the Olympic Squad to represent Jamaica at the 2004 Athens Olympics, even though he had an ongoing hamstring injury. It was this injury that led to him being eliminated in the first round of the 200 metre race.

He continued to race throughout 2005 and 2006 with this injury, going on to reach the world Top 5 rankings, but the injury saw him bowing out of each season early.

Donald Quarrie held the national 200 metre record until Bolt went on to break it in 2007 as well as earning two silver medals at the World Championships in Osaka, Japan. It was at this exact time that Bolt decided to get serious with his running career and what propelled him to work hard to be the best.

What was Usain Bolt’s diet like in the lead up to a sporting event?

Bolt has, on numerous occasions, stated that he eats a lot of broccoli – although he doesn’t actually like it.

What’s more, it was rumoured that whilst in Beijing for the Olympics, Bolt was consuming his fair share of chicken nuggets – roughly 5x boxes of 20 nuggets a day (you know where from!), along with the usual side of french fries and apple pies. As a fussy eater, I totally get this! And you know, there’s a tonne of protein in chicken (even if it is deep fried).

What has Usain Bolt done since retiring?

Bolt has since taken up professional football (or soccer) and, since retiring from athletics, has gone on to train with teams across Norway, South Africa and his home country of Jamaica.

He’s currently trying to secure himself a space with the Central Coast Mariners in Australia where he’s currently on trial. He recently just played in his first professional match, scored two goals and posed his famous lightning pose.

These runner profiles are new to Jogger.co.uk, if you like this why not check out the one we recently did on Eliud Kipchoge.

NHS70 Virtual Run ‘7 For 70’ – everything you need to know, from what it is to how to get involved

Struggling to get to the gym? 6 tips to fit your workouts into your day.

Is a runstreak really that good for you? Should you really run every day?